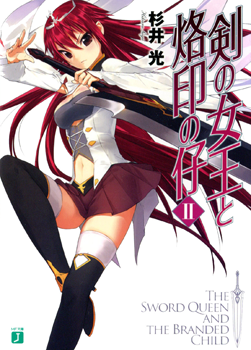 The Sword Queen and the Branded Child. Chris was a boy who was cursed with the Brand of the Beast that devoured the fates of the surrounding people. His life changed when he met a girl when he was wandering a corpse-laden battlefield as a young mercenary. She, Minerva, appeared before his eyes waving a huge sword in clothes of pure white. With the power of foresight and overwhelming swordsmanship, she was a legendary swordswoman feared as a grim reaper. Smiling in slaughter and weeping in sleep, that was the heavy burden shouldered by the girl. That fateful night, Minerva’s fate of being killed by Chris was distorted by the brand. The two souls destined to be in the company of death met in the depths of despair. In the symphony of blades and blood, the boy and girl’s beautiful legend of sorrowful magnificence is born!