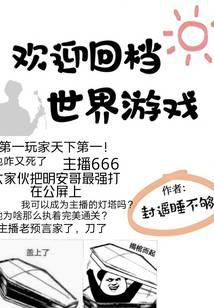 Welcome Back To World Game

“When you see this line of words, the world game has already begun.”
“This is the [Live Sports Global Live Game] to redeem Zhai Xing.”
“Here, all players travel together one world after another. You can become hope in the dangerous end times, witness the reincarnation in the future controlled by the bionics, and the village where the werewolves and the gods fight for the camp…”
“I am Su Ming’an, and I have the only death recovery skill.”
“The eliminated players became the audience. In the billions of hot live broadcast rooms, they said that I was the strongest [first player] and that I was the one who lasted forever.”
“Some people also say that I am a traitor sent by the organizer and an incompetent leader.”
“…But it doesn’t matter.”
“Those who hold salaries for everyone must not be frozen to death in the wind and snow. Those who clear the way for freedom must not be embarrassed by thorns.”
“——I will bring [the glorious future] to everyone who has looked at me.”

The motherfucker who rated this novel 1 star deserves death.
This novel is at least 4 stars in terms of quality.
Here you have a protagonist in a world where one billion people of earth get chosen and pitted in a game by higher dimensional creatures.
The stories, the characters of each arc tell us about the worlds that were conquered by those high dimensional beings and make you sympathize with them.
The protagonist has the ability to rewind time (by death) but the checkpoint becomes random after the tutorial which is why he doesn’t want to rely on it (plus constantly dying already gave him plenty of depression and PTSD).

This review Is pretty accurate.
The other thing is the MC has a severe Messiah syndrome. Also when things hit the scale of a billion people, the authors view on human psychology is vastly lacking to write this story.
His take on how humans would react ends up putting me of this novel so I’m dropping it. But the story it self is great- 4 stars

Because of your review on Im a god so I gonna give this novel a try.

Do you have any recommend?

This novel is better than the general garbage novel on the website, can be read without pain in the brain. Recommended to read.